The Painting Tour Story in Tweets 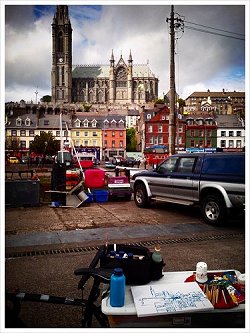 The tweets made while on the Painting Tour are being collated and presented now on one page. It includes tweets on the hashtag #paintingtour and other tweets that tell the story of the tour (where I forgot to use the hashtag or chose at the time not to swamp it with too much detail).

As the tour lasted 85 days I’ve added an index at the top of the page so that you can jump to the tweets of a particular day. Where my tweets are a response to somebody else’s, I’ve included the text of theirs rather than provide an outgoing “in response to” link.

All the photos referred to have been pulled in so as to save you clicking out to the relevant picplz, twitpic, yfrog, etc, link, though those links can also be followed. These are mostly photos taken with the phone or the tablet whilst the best photos were taken with the camera proper and not shared contemporaneously – a selection of these will be presented in their own gallery.

For readability I plan to make more changes, mostly in styling, so that the core text can be more easily followed as a continuous story. It takes a lot of time though, so bear with me.

A link to the painting tour story in tweets has been placed up on the main menu on the top navigation bar as “tweets”.

This entry was posted in About The Trip. Bookmark the permalink.