In July and August, 2011, I am planning to cycle around Ireland, all of the historic 32 counties, painting as I go, with the route determined by social media – where people volunteer to host me in return for one of those paintings.

This is also where I’ll blog the trip including, if I can manage it, some audio and video clips. I’ll continue to use my regular account on twitter to tweet the trip and, I imagine, my regular account on Facebook to neglect it. Photos will appear in a variety of places depending on whether they are taken by my little phone (picplz, twitpic) or my camera proper (flickr, pix.ie). And so verbose am I that there may even be a book – or at least I plan to capture enough words for one. 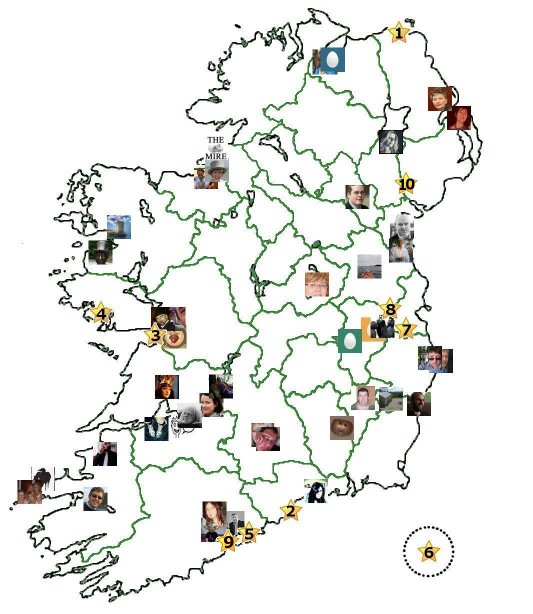 Roughly, the route will go from Dublin clockwise around the island back to Dublin, but as the 32 counties are not lined up in a convenient circle the route will involve some serious zigging and some frivolous zagging. I expect to have a significant number of hosts before the trip starts so will have a reasonable idea of the general route come Friday, July 1st, but I also expect to be soliciting hosts as I cycle and the sun is setting which will pretty much finalise the route.

Apart from hosting, people can also get paintings and be involved by helping me prepare. This trip has been conceived and planned without me having a penny, but there are a few things I need for the trip (e.g. a tablet, a mifi, dry bags, tyres) – so I’ll be posting details of how people can commission me to cycle to any spot on the island in order to do a painting for them, in return for €75 paid in advance to facilitate equipping me for the trip.

While the trip is not being done specifically for charity, I will be auctioning a painting from the trip for Shine and making it possible for people to donate to Shine as I cycle.

This entry was posted in About The Trip. Bookmark the permalink.