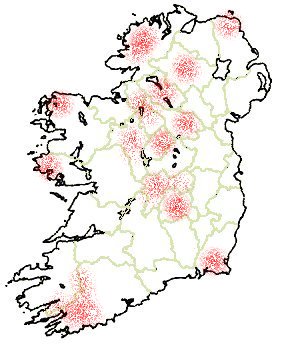 Main Areas With No Hosts

As of June 29, there are about 43 people who have volunteered to host in exchange for me doing a painting in their locale.

This map highlights the areas of the country where currently there are still vacancies for hosting.

Given that the route around the island is generally clockwise, the greatest need would be in the areas planned to visit earliest – southern half of Wexford. in week 1; west Cork and east/south Kerry in week 3, and maybe Laois and Offaly in weeks that I haven’t decided yet where they fit.

I should stress that there is no great need to have hosts ageed for everywhere before I set off (on Friday, July 1st) as a major characteristic of the trip is envisaged as seeking hosts from the road – or to give it its scientific name, making it up as I go along.

The map is also not absolute, in that there there will be room for hosts in some areas not shaded red e.g. west Clare, south Derry, south Armagh, and glamorous parts of Kerry. Also at any time new commissions received can create a need to go to a part of the country where I don’t currently have a host, and later the route significantly.

A look at the white spaces on the latest map of hosts should give a more precise idea of where hosts may be needed.

This entry was posted in Hosting. Bookmark the permalink.